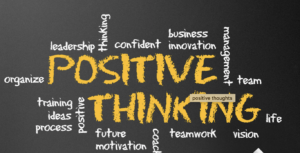 The Aim of this article

Show why they can damage you in the long run

Show you how to create a thought and act on it enforcing positive change.

How many times have we heard just think positive and everything will be ok. A million right, but how many times have you tried to think positive and it just didn’t happen, it didn’t change how you were feeling and it didn’t make a difference, in fact it only upset you even more because you were let down by your very own thoughts. Don’t worry or think your broken the truth is everyone does this and everyone gets let down by our own thoughts because we just don’t do anything with them apart from think about them, but for every thought you should have an action and that’s where dynamic change comes from not the thought but the action that follows it.

Why it doesn’t work: Positive thought is important in the grand scheme  of things, the problem is people put too much weight on to it, they don’t see it as part of a two phase process and just try and go off it alone to create change but on its own it won’t. Think of it like this positive thought is like trying to control the weather, ” today I want it to be sunny, today I want it to be sunny” you wake open the curtains and low and behold it’s rain. You see it doesn’t matter how positive you think if the environment you’re in doesn’t warrant it the thoughts won’t either.

The damage they can do: Do you like failure, do you like disappointment, do you like it when you let yourself down ?. The answer is of course a resounding no, so imagine telling yourself when you wake every morning todays going to be a good day and a little feeling inside you showing you different. Why can’t we just do as we say, why won’t my feelings listen to me, why can’t I just have a normal day and the list of questions go on and on. In fact you then get even more disheartened and disappointed that you can’t even get that right and even your own feelings don’t listen to you. The negativity by failing to live up to the positive thought makes you feel even worse, the anxiety, the fear, the disappointment are all much more powerful that the positive thought you started off your day with. Positive thought has a place but not on their own they really need the next step for them to hold any real value and meaning to us. Positive thoughts alone often only ever lead to disappointment.

How to fix it: So as I mentioned previously positive thoughts MUST be part of a two phase process.

THE THOUGHT FOLLOWED BY THE ACTION

Let me explain why this is vital. It’s the action that makes the thought a reality, let me give you a statement to live by, positive thought with positive action = New emotions and behaviours.  Everything we do is based on a belief that leads to an emotion. We do things because we feel good or feel bad or feel anxious or feel fear. All of the above are emotions and that’s what sculpts our behaviours in life, go on prove me wrong, when you sit with that statement you should quickly realise how very true and accurate it is. So we have to do it differently, positive thought is just that positive thought, however when followed by a positive action it creates change, change in our thoughts, our belief and of course our end state. And of course happiness is created by change not chance. Even this article can inspire you to look at things differently but without you acting on it nothing will change apart from you feel motivated for a while. So today do yourself a favour and create a positive thought and follow it up with an action. It’s the actions that will lead to change.

Remember you are only ever one message away from change and as serene gold members you will receive 20% off all our therapy packages with us here at Serenity.

Serenity By Kevin is a registered company.
Number SC707757.